Morris Care celebrated the VE Day 70th Anniversary with residents at Corbrook Park, Cheshire and Stretton Hall, All Stretton, part of the Morris Care group, by holding a 1940’s garden party which included an entertainer singer and the attendance of a modern day 1980’s German Military Tank.

The anniversary of VE Day, marking 70 years since the end of the Second World War in Europe, offered an afternoon of entertainment for residents at our Stretton Hall care home, who were met by a Military Tank mid-morning and given a talk by two enthusiasts who brought the tank to the home. They had the luxury of listening to the 1940’s vocalist who arrived in the afternoon, before enjoying tea and treats which were served shortly after.

Whilst over at Corbrook Park care home, the residents were joined by friends and family and spent the afternoon reminiscing about their time during this period of their lives.

Mavis Anderson, resident at Corbrook Park, spoke about her time being a part of the Happy Entertainment group, following her time at London College of Music and how she went on to be a musical theatre performer. She started singing and dancing when she was just five years old.

At the end of the afternoon, residents and staff at Corbrook were moved by the touching poems recited by Bert Molsom, which included recollections and references of his time as a Captain with the Royal Army Pay Corps.

“The VE celebrations proved to be such an emotional but lovely remembrance that saw the residents really enjoying themselves. The appreciation shown about the commemorative celebration said it all and the time the younger generations gave to understand and listen was a big support for them. The memorial afternoons were spent chatting to the residents about their memories during the war, toasting those lost but not forgotten and the soldiers of today – it was such a lovely occasion to be a part of.”

For more information on Morris Care and its seven care homes in Shropshire and Cheshire, visit www.morriscare.co.uk. 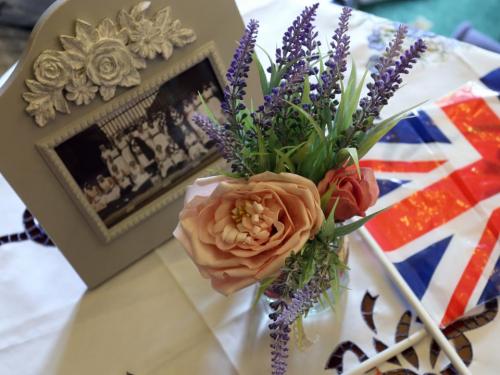