Oldbury Grange residents enjoyed an exotic afternoon as enthusiastic animal handler Ryan, from Exotic Zoo based in Telford, brought his mystery box of friends along for some fun. Residents were lucky enough to hold and interact with several rare animals, as well as listen to the handler’s fantastic and comical story-telling.

The visit started with lovely Lola, a Tree Frog. The residents then held and stroked a Bearded Dragon called Dave that lives with four females and often eats his own babies! They also had the opportunity to hold a Tenrec called Lisa that looks like a baby hedgehog and is related to elephants. The colourful Chameleon, Pascal (who has the same name as the chameleon from the Disney film Tangled), was a bit of a showstopper and his beautiful markings definitely got the residents talking. The finale that grabbed everyone’s attention though was the handler’s personal pet, Mowgli, a wriggly Meerkat that loved to pose for a picture but definitely looked nicer than he smelt.

Janice, Social Life Coordinator, said: “It was such a brilliant afternoon, we are so grateful to Ryan and the animals for their time. The residents really embraced it and their facial expressions spoke volumes! It is always great when we can organise something different for the residents to enjoy. We look forward to welcoming the Exotic Zoo back in the future.” 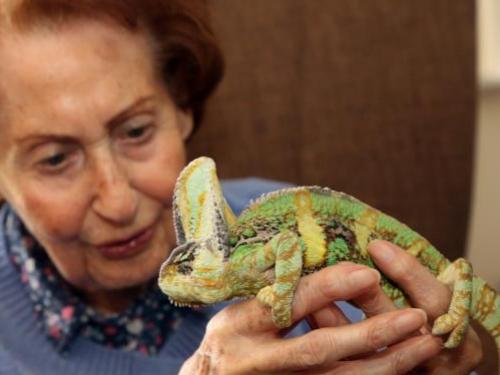 Capturing the inspiration on #InternationalNursesDay2022
Tackling loneliness at Morris Care: #MentalHealthAwarenessWeek
#NationalGardeningWeek: Q&A with James
Magic in the air at Corbrook Christmas Fair
Up ↑