After hours of knitting and crocheting by staff and families of Oldbury Grange Nursing Home, a stunning poppy dress has been unveiled for residents ahead of Remembrance Day.

The commemorative dress, which is made up of more than three metres of red satin and 600 handmade poppies, took more than seven hours to create on the Home’s mannequin ‘Dolly’.

It was masterminded by the Home's Social Life Co-ordinator Mandy Bullock who said she wanted to do something extra special for residents this year.

Mandy said: “The idea was inspired by our wonderful residents, our community and their combined spirit. It’s been a difficult year but we’ve been uplifted by how many people wanted to get involved. Once we had spread the word the poppies started to flood in, with constant deliveries arriving on the doorstep! Our residents have loved seeing the dress come together and it’s extra special because they know their families have lent a hand.”

Marion Low, who has a relative at the Home added: “The dress is a fantastic idea. It looks so beautiful and a striking way to mark Remembrance Day for the residents. As a relative, it was great to have the opportunity to be involved in knitting the poppies. Well done to everyone.”

The dress is on display in the Home’s lounge and will be the focus for residents coming together to pay their respects to those who have served and sacrificed to defend our nation. 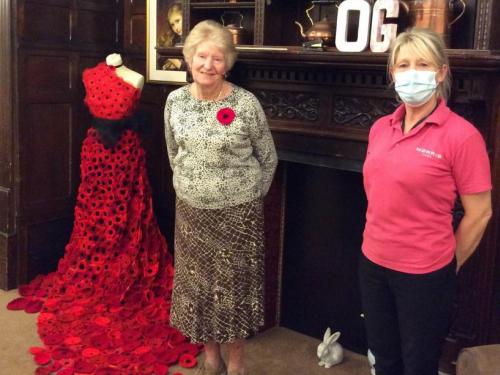